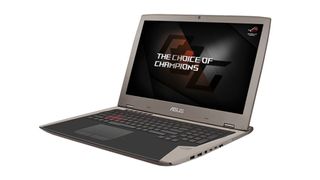 Extending its gaming lineup today, Asus launched the ROG G701 in India. The notebook is powered by mighty hardware specs and an overclockable NVIDIA GeForce GTX 1080 graphic card. For amazing gaming visual, it has a 4K UHD display with wide viewing angles and a new Bio-Armor design in “Armor Titanium” and “Plasma Copper” colour scheme. Similar to its hardware, the price is also premium, it is priced at Rs 3,49,990.

The Asus ROG G701 boasts of a 17.3-inch full HD display with a refresh rate of 120Hz. Its wide viewing experience is backed by NVIDIA G-SYNC technology that promises to deliver smooth and detailed gaming visuals by eliminating visible tearing and stuttering. The G-SYNC technology also embraces the VR gaming experience when coupled with GeForce GTX 1080 GPU that has 8GB GDDR5X memory. Asus has used the same G-SYNC technology in ROG Zephyrus which was recently launched in India.

The 7th generation Intel Kabylake Core i7 processor powers the laptop, aided by 64GB DDR4 2800mhz RAM. There’s also a Trinity Display Technology with 4K2K output which is capable of giving three displays simultaneously using HDMI, thunderbolt and mini Display connectors. Apart from that it has HyperDrive RAID 0 and NVMe and PCIe technologies for blazing-fast storage speeds. For keeping the machine cool, the laptop has dedicated cooling modules for the CPU and GPU to effectively cool each component.

Its anti-ghosting keyboard with 30-key rollover technology ensures the correct interpretation of the command entered by the user even if 30 keys are used simultaneously. It’s not a unique feature but there’s even a dedicated record key for one-click gameplay recording.

The laptop has ROG’s proprietary Gaming Center, which is a portal to ROG utilities, apps and tools. It let’s you monitor and fine-tune system components, manage game profiles, keyboard profiles and macros, and lot of other stuff.