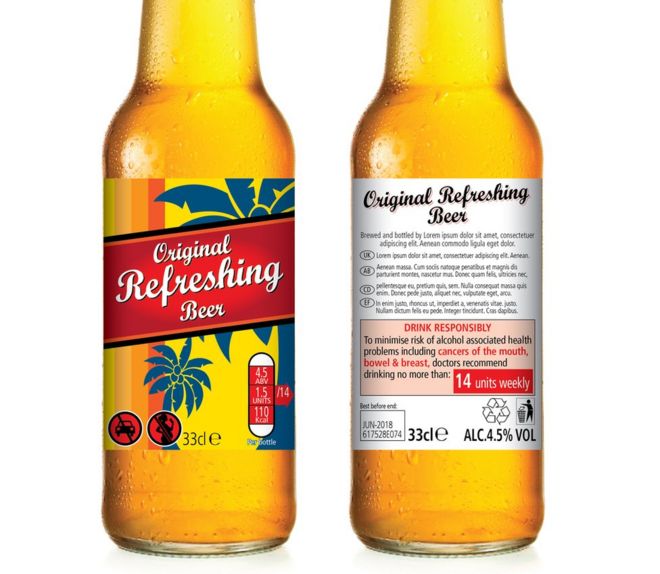 The Royal Society for Public Health is calling for change in alcoholic drinks labelling, citing a public “awareness vacuum” on how alcohol affects health.

The society wants it to be mandatory to include the government’s guideline to drink no more than 14 units a week.

Drink manufacturers could also warn of the link with health conditions such as bowel and breast cancer.

But a drink industry body said the public is “strongly opposed to cramming more information on a pack”.

In its report, the RSPH suggests a drink-drive warning and using traffic light colour coding, similar to that used on many food items in the UK, could be helpful for drinkers.

The recommendations are based on a survey of almost 1,800 UK adults, which it conducted with the Portman Group, the alcohol industry standards body.

The society found calorie content labels could be effective and cause 10% of consumers to switch from the highest alcohol drinks to the lowest across all socio-economic groups. This effect was particularly pronounced among young drinkers.

Prof Shirley Cramer CBE of RSPH, said: “The potential health consequences of alcohol consumption are more serious than many people realise,” with 90% of Britons unaware of the link between alcohol and cancer.

Prof Cramer said that only one in six of the public was aware of the new alcohol 14-unit low-risk guidelines, despite them being introduced two years ago. She put this down to the drinks industry failing to update labels.

Warnings are now mandatory on most products “from tobacco to food and soft drinks, but alcohol continues to lag behind. If we are to raise awareness and reduce alcohol harm, this must change”, she said.

Prof Sir Ian Gilmore, of the Alcohol Health Alliance (AHA), welcomed the report: “Alcohol is linked with over 200 disease and injury conditions, including heart disease, liver disease and at least seven types of cancer.”

He accused alcohol producers, of wishing “to withhold information on alcohol and health from the public”.

“We all have a right to know the drinking guidelines, along with the risks associated with alcohol, so that we are empowered to make informed choices about our drinking.

But John Timothy, of alcohol industry standards body the Portman Group, said the research showed “there was little public interest in a radical overhaul of drinks labelling and strong opposition to cramming more information on packs”.

“The study shows that 86% of consumers only look at labels for factual information and branding with 80% saying they would like to see less cluttered labels.”

He said the Portman Group continually updates guidance to alcohol producers so consumers are provided “with accurate and accessible health information”.