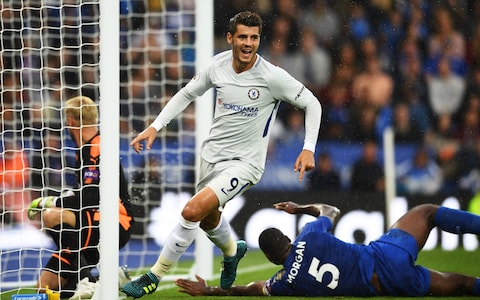 Chelsea have ordered their own fans to stop singing an anti-Semitic song about record signing Alvaro Morata after the striker scored his third goal for the club.

A section of the travelling supporters at the King Power Stadium sang  ‘Alvaro, oh, Alvaro, oh. He came from Real Madrid, he hates the  ****ing Yids’ in reference to Chelsea’s rivalry with Tottenham  Hotspur.

But Chelsea, whose owner Roman Abramovich is the chairman of the  Federation of Jewish Communities of Russia, issued a statement that said: “The club and the players appreciate the fans’ passionate  support away from home. But the language in that song is not  acceptable at all. We’ve spoken to Alvaro after the game. He does not  want to be connected with that song in any way and both the club and  the player request the supporters stop singing that song with  immediate effect.”

The offensive chant cast a shadow over Chelsea’s third successive  victory and Morata’s impressive start. For a club that supposedly  messed up the transfer window, the Blues could be far worse off.

Antonio Conte’s men had to hang on to this latest win at times,  following Jamie Vardy’s penalty, but there are signs that some of  Chelsea’s summer business will prove to be very wise indeed.

Add in the fact that Eden Hazard returned from injury as a late  substitute against Leicester City and it is clear that Conte’s squad  is more than capable of making sure the Premier League title is not a  straight fight between the two Manchester clubs.

Morata netted for the third time with his head in Chelsea colours and,  in Europe’s top leagues, only Andrea Belotti has scored more headed  goals than the Spaniard since August last year.

Diego Costa’s absence and possible return to the club next week still  remains an issue for Chelsea off the pitch, but, on it, Morata is  proving there is plenty of life after last season’s top scorer.

“It’s always important for the striker to score,” said Conte. “For me,  it’s very important to see he’s improving and always more involved in  our idea of football. Then if he scores I’m very happy. I’m pleased  for the player.”

Other than Morata, midfielder Tiemoue Bakayoko showed signs at the  King Power Stadium that Nemanja Matic will not be missed quite as much  as those inside Manchester United would have you believe.

Bakayoko was a powerful presence in the centre of the pitch and looks  like he can form a formidable partnership with N’Golo Kante, who  netted a rare goal against his former club.

“I think to win three in a row is important for the players because we  are doing very well,” said Conte. “It’s not easy in England to win,  especially if you are the champions and you start in a bad way. But I  have great players and I trust them.”

It was clear from the early stages that Morata versus Wes Morgan would  be a key duel. The Leicester defender produced some good blocks to  frustrate the 24-year-old, but could not stop him opening the scoring  in the 41st minute with a well-placed header from Cesar Azpilicueta’s  cross.

Morata’s goal came barely a minute after Leicester had squandered  their best chance to take the lead. Islam Slimani robbed Kante on the  edge of the Foxes penalty area and released Riyad Mahrez towards goal. The Algerian played the ball back to Slimani, but the striker’s shot  was saved by Thibaut Courtois.

Most of Slimani’s first-half touches had provoked groans from the home  crowd and it was no surprise that he was replaced at the break by  Demarai Gray. Andy King was also sent on for Marc Albrighton.

But Leicester’s substitutes did not have the desired immediate impact,  as Chelsea doubled their lead through Kante. The midfielder produced a  shot from 25 yards more in hope than expectation, but his daisy-cutter  caught out Schmeichel and nestled in the corner of the net.

It looked as though Chelsea were cruising to a comfortable victory,  but there was a lifeline for Leicester just after the hour mark.

Under pressure from Gray, Azpilicueta tried to poke the ball back to  Courtois but Vardy nipped in and the Belgian tripped the England  international.

Referee Lee Mason had no hesitation in pointing to the spot and Vardy  fired the ball into the net to enliven what had been a relatively  subdued home crowd.

Hazard made his entrance with 12 minutes remaining and Chelsea managed  to hold on to their one-goal advantage to underline the fact Conte’s team is in good health.