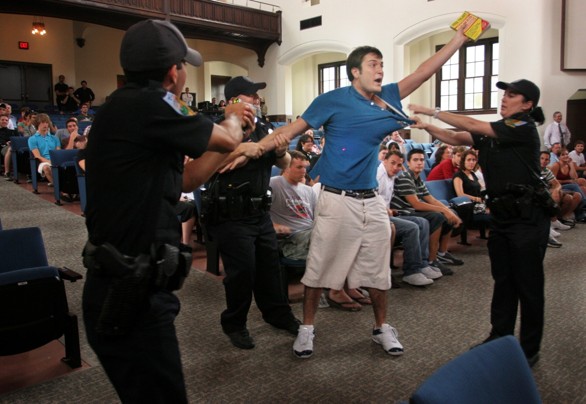 “The more you praise and celebrate your life, the more there is in life to celebrate.” – Oprah Winfrey

Are you the life and soul of the party: an extrovert who loves to have a good time, but tends to get a bit rowdy when part of a crowd? There is a fine line between celebrating your life as per Oprah Winfrey quoted above and allowing the party to get out of hand.

When a celebration gets too loud, and out of control, it can turn into a disaster as party-goers end up being arrested for disturbing the peace. Also, when inebriated or intoxicated, it is normal to lose self-control and either cause a fight with another person or utter racial slurs. This behaviour could also lead to a “disturbing the peace” misdemeanour charge.

Therefore, let’s look at the definition of “Disturbing the Peace”, how to manage a party so that everyone has a great time, and no one gets arrested for a misdemeanour offence.

What constitutes the definition of Disturbing the Peace?

According to the online version of the Encyclopaedia Britannica, Disturbing the Peace is also known as Breach of the Peace. It is a misdemeanour or minor offence that usually incurs a monetary fine instead of a prison term. However, if the perpetrator cannot pay the fine, a prison term can be substituted.

Typical Disturbing the Peace subcategories include:

Even though “Disturbing the Peace” is considered a misdemeanour offence, it can be escalated to a felony (or serious crime) depending on the context. A typical example is that of a bar fight that has gotten out of control, and the victim is severely injured or dies. Also, repeat offenders often end up with their latest misdemeanour charge being upgraded to a felony charge.

Therefore, it is vital to understand that, while being “the life and soul of the party” and having a good time, it is critical to behave within the parameters of the law. No one wants to be arrested at a party or celebration.