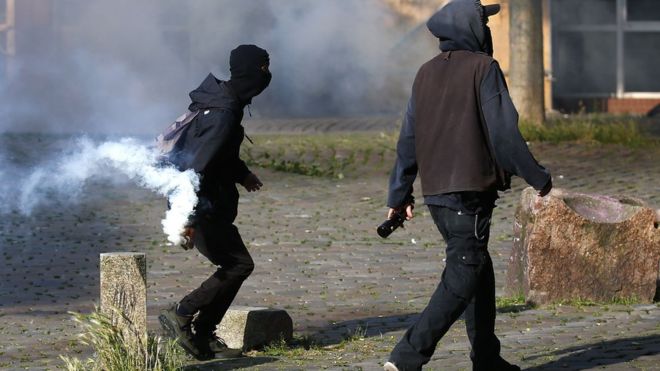 Germany has banned a far-left internet portal accused of inciting violence and rallying activists who rioted during last month’s G20 summit in Hamburg.

Police have seized computers and some weapons in raids on addresses of activists in the south-western Baden-Wuerttemberg region.

Dozens of anti-capitalist protesters clashed with police during the G20.

In a tweet, the German interior ministry described the portal as “the central communications platform among far-left extremists prone to violence”.

It said the site was used to exchange tips about violent protest methods and to spread “anti-constitutional extreme left-wing content”.

Could Germany have avoided G20 clashes?

Who are the G20 protesters?

A banning instruction forces internet service providers (ISPs) to block a particular website, such that users trying to access it see an error message or an official warning.

Sometimes websites take evasive action by switching to a proxy server abroad or by using the internet privacy tool Tor.

In Hamburg, nearly 200 police officers were injured in clashes with masked protesters in early July.

Under the slogan “Welcome to hell”, protesters looted shops, torched cars and threw stones and petrol bombs at police, who tried to disperse them with water cannon and baton charges.