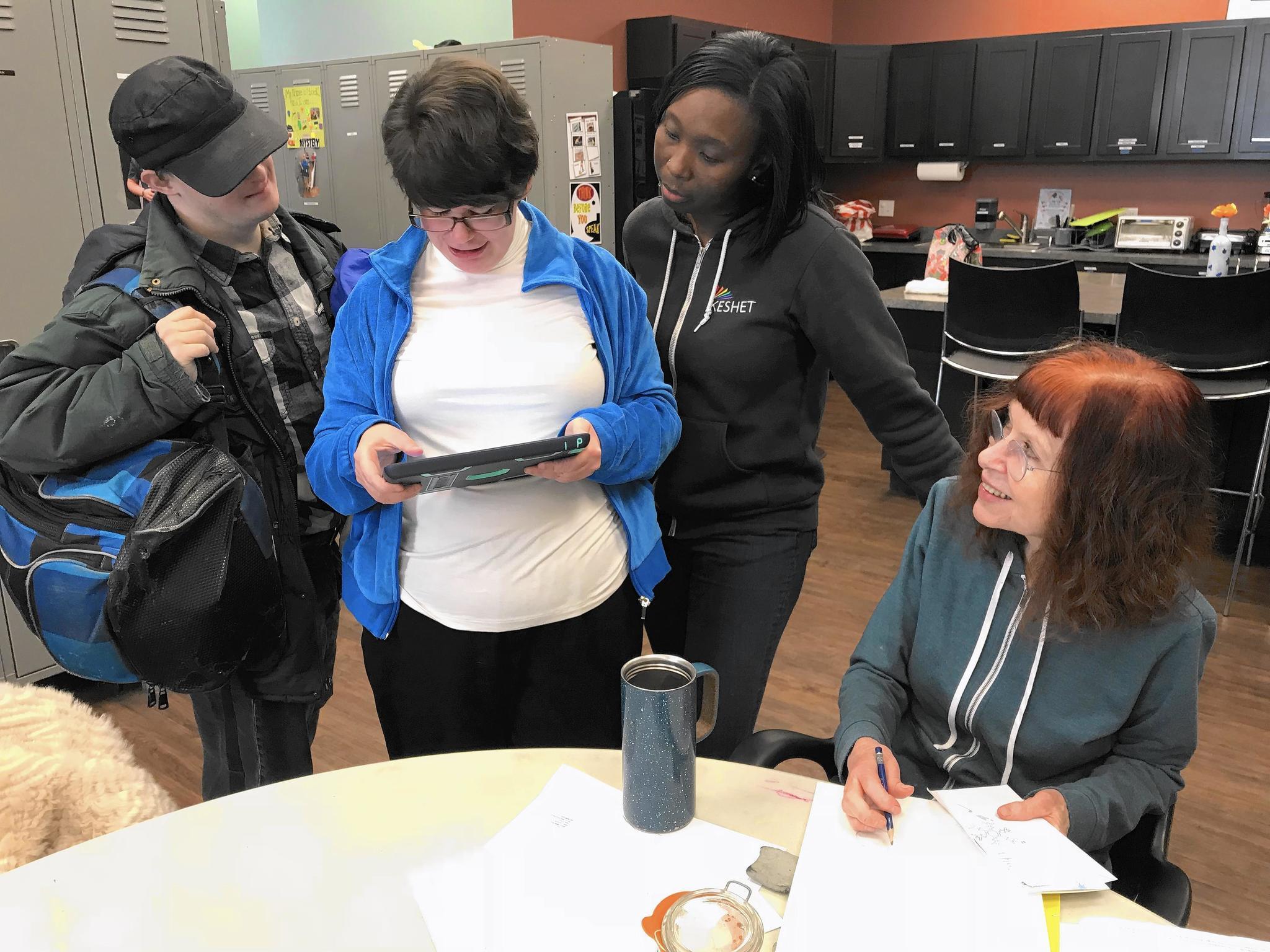 The young adults gathered in Skokie before heading off to their morning jobs were exuberant about the day ahead and ready to share with the Keshet staff recent happenings in their lives.

Keshet, based in Northbrook, offers programs for over 1,000 children and adults with intellectual challenges, according to the organization’s website.

The GADOL program, which stands for “giving adults daily opportunities for living,” at Keshet provides vocational and life skills to those with learning disabilities. Every weekday, young adults ages 22 or older meet in Skokie before heading off to workplaces with a sense of purpose and confidence, program leaders say.

They return for lunch as some work part-time and others head off to new afternoon jobs.

“We have programs in a number of schools, but that’s the educational component,” said Keshet Board of Directors Chairman Shalom Klein, a Skokie resident. “These are adults ready to go to work. They all have jobs.”

GADOL is only one program under Keshet, which provides multiple services. Although the program is international, leaders say Keshet has a decidedly local presence within the Chicago area.

“Because we’re entrenched in the community, and we’re always out with work and taking care of community activities, we consider Skokie one of our major homes,” said Keshet CEO Abbie Weisberg, another Skokie resident.

On a December morning, Weisberg stopped by the GADOL space in Skokie, greeting “team members” — as Keshet refers to its participants. Some showed her art they had created, others gave a quick hug, a few more played games on computers and tablets they brought along.

“You can tell I’m here all the time,” Weisberg said. “I like to be where the action is and see what’s going on because it keeps us connected to our real mission.”

That mission is “to do whatever necessary to allow individuals with disabilities to achieve their potential,” according to the organization’s website.

More than 30 years ago, a small group of Jewish parents from Skokie and beyond sat around a kitchen table and raised concerns that there were not enough programs for the disabled, Weisberg said.

“Soon after we started, we gained national recognition,” she said. “We quickly understood there was a greater need, and we became known not for our Jewish programming — although that was always a key part of our mission — but as being a connector. We became a community.”

One workplace for a number of the GADOL adults is Milt’s Extra Innings, a kosher restaurant in Chicago. Milt’s Barbecue for the Perplexed opened first, employing disabled adults from Keshet, and then the new restaurant was added next door — in part to provide even more work opportunities for Keshet.

Before the adults headed out for their jobs on this December day, art therapist Rita O’Hara worked with a small group at one of the tables. One adult in the program retrieved a watercolor rendering of colorful flowers leading to a peaceful empty bench that she wanted to show off.

“They do some beautiful work,” O’Hara said.

One challenge for the program, however, is cost, Weisberg acknowledged. “For every person we take in, there’s a $20,000 or $30,000 cost to the organization.”

Keshet runs two major fundraisers every year — a concert and a banquet — which raise close to $2 million.

That way, GADOL could serve a lot more than 35 people.

Keshet’s educational programs can be found in schools throughout the Chicago area including in Skokie and Northbrook and Chicago. Keshet also runs camps, drawing children from all over the Chicago area and beyond. Keshet has been a consultant for other programs for disabled individuals organized in other countries, leaders say.

Keshet leaders say their success is based on programs that provide children and adults a chance to thrive and join together in a way they never did before.

“These kids are so connected in so many ways,” Weisberg said.”There is a sense of friendship, and they walk into whatever program they attend and they feel right at home.