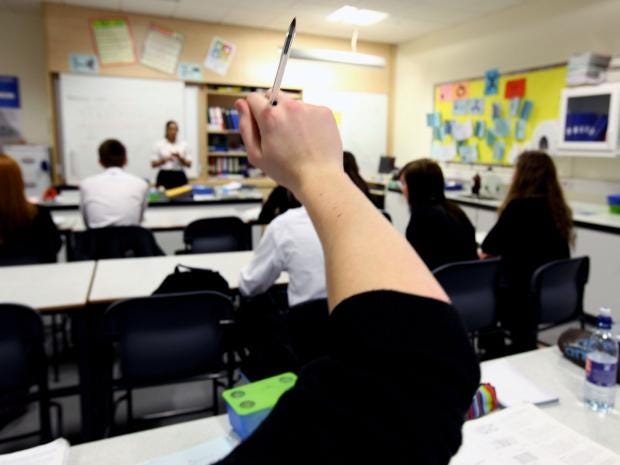 Children are being put at risk of self-harm due to a lack of personal, social and health education lessons (PSHE) within schools, new research has suggested.

Experts said the number of young people affected by mental health problems, including self-harm, was “alarming”, and called on the government to address the issue with the introduction of compulsory PSHE in all schools.

The new study, by the University of Hertfordshire, found young people who have a “low sense of belonging” in their school are nearly seven times more likely to self-harm than those who feel attached to it, for instance by feeling included within lessons.

Students should be given specific lessons on mental health, wellbeing and community specifically in order to help tackle the problem, the study’s authors told The Independent.

The findings follow those of another recent study published by the university’s Health Behaviour in School-Aged Children England team (HSBC), revealing the extent to which young people’s experiences of school, their local community and parent-child relationships can impact on self-harming behaviour.

Dr Ellen Klemera, a senior research fellow in adolescent, child and family health at Hertfordshire, said: “While our study has uncovered truly worrying levels of self-harm among young people across England, these latest insights present an opportunity to focus attention on the places where the biggest difference can be made.

“The data on sense of belonging to schools is particularly striking and strengthens the argument that greater support should be offered to schools to implement prevention and early intervention measures that can establish and protect good mental health, and embed a positive ethos and culture of community within our schools.”

Currently, schools are obligated to “make provision for PSHE, based on good practice,” but it is still a non-statutory subject on the curriculum.

Earlier this year, Education Secretary Justine Greening announced sex and relationships education would be made compulsory in all of England’s schools, following years of campaigning from school and charity groups. While the same promises were not made of PSHE, she said she intended to make the subject compulsory in the future, following further consultation.

With the government currently in the process of drawing up its reformed sex and relationships curriculum, the research group have called for a greater focus on mental health and wellbeing specifically, if vulnerable children left feeling excluded from school communities are to be protected.

Tom Madders, director of campaigns at children’s charity YoungMinds, said in response to the study’s findings: “Feeling safe, comfortable and valued at school is how all children and young people should be. But at the moment, schools and students are under so much pressure to perform academically that wellbeing of students can often be pushed to the side.

“It is vital that the government re-balances the education system to focus on the wellbeing and mental health of students. There is no quick fix, wellbeing must be integrated into every part of a school to ensure that children and young people feel like a valued member of their school community.”

The university study, undertaken in collaboration with the World Health Organization (WHO), surveyed a total of 5,335 anonymous students aged 11-15 in England.

Pupils were asked a series of questions on a five point scale from “strongly agree” to “strongly disagree”, responding to statements such as: “I feel safe in this school”, “other students accept me as I am” and “the students in my classes enjoy being together”.

Of those surveyed, pupils who had low school sense of belonging – defined by characteristics such as not feeling included in lessons, and not engaging in discussions with teachers or classmates – were found to have 6.70 times greater odds of reporting self-harm as those with a high sense of belonging and 3.16 times greater odds than those who had felt medium attachment to school.

The research builds on key findings from the most recent HBSC survey –  more than one in five (21.5 per cent) 15-year-olds in England said they had self-harmed, a figure that has increased over the past decade.

Nearly three times as many girls admitted to self-harm than boys (32 per cent compared with 11 per cent respectively).

The number of girls treated as inpatients after cutting themselves almost quadrupled over the same period – up from 600 to 2,311, a 285 per cent rise.

The latest study showed PSHE to have a positive impact on the health and wellbeing of young people, with nearly three quarters of boys and girls agreeing the classes help them to look after their own health.

Speaking to The Independent, Dr Klemara said greater intervention was needed to ensure schools are providing a safe and inclusive environment – helping to create a sense of community for potentially vulnerable children.

“So much depends on schools,” she said, “but at the same time schools should not be blamed for the rise in self-harm, and interventions should not be confined to the school environment.

“Sense of belonging can be improved with focus groups, clubs and by creating a safe community for pupils in the classroom, along with the important health and wellbeing lessons learned through PSHE.

“We also need to look at how community initiatives can have a more positive impact on teenagers’ health and wellbeing.”

The data also shows that 15-year-olds who feel a weak connection to the neighbourhoods in which they live are around three times more likely to self-harm than those who feel a sense of belonging.

Strong parental relationships were found to play an important protective role in young people’s mental health, with the odds of self-harm among those who struggle to communicate with their mothers two-and-a-half times higher compared with those communicate easily.

For those who struggled to communicate with their fathers the odds are twice as high.

However, friendships with other young people were not found to have a significant bearing on the likelihood of self-harm.

PSHE Association chief executive Jonathan Baggaley said: “This research highlights the need for high quality, compulsory PSHE education in all schools to support pupils’ mental health and address issues such as self-harm, which affect an alarming number of young people.

“The indication that lacking a sense of belonging to schools or communities has such a negative impact on young people’s mental health is also alarming, and another area in which a joined up PSHE programme can help by fostering healthy, constructive relationships and self-esteem.

“That three quarters of pupils surveyed say PSHE helps them look after their own health further strengthens the argument for Government to ensure these lessons are taught regularly in all schools to all pupils.”

A Department for Education spokesperson said: “The best schools create a happy, safe and supportive environment so that all children can fulfil their potential.

“No child should suffer alone from mental health issues and we are investing a record £1.4bn to ensure all children get the help and support they need.

“We are strengthening the links between schools and NHS mental health staff and have announced plans for every secondary school to be offered mental health first aid training.”

The Government is due to publish a green paper later this year, listing proposals for further improvement of mental health services in and outside of schools.