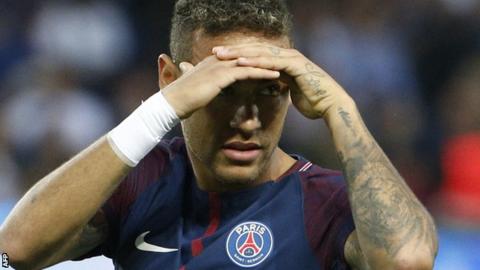 Uefa has opened a formal investigation into Paris St-Germain as part of its “ongoing monitoring” of clubs under Financial Fair Play (FFP) regulations.

PSG have been owned by the Gulf state of Qatar, via its Qatar Sports Investments fund, since 2011.

The six-time French champions have failed to meet FFP rules before – receiving a fine, a spending cap and only being allowed to register 21 players for the Champions League in 2014.

Uefa’s FFP regulations were approved in 2010 and the first assessments began the following year.

The ‘break-even’ element states clubs can spend 30m euros more than they earn over a three-year period.

A Uefa statement said the investigation into PSG would “focus on the compliance of the club with the break-even requirement, particularly in light of its recent transfer activity”.

It added: “In the coming months, the investigatory chamber of the Uefa club financial control body will regularly meet in order to carefully evaluate all documentation pertaining to this case.

“Uefa considers financial fair play to be a crucial governance mechanism which aims to ensure the financial sustainability of European club football.”

In a statement PSG said: “The club is surprised by this approach given that it has constantly kept Uefa informed about the financial impact of all players’ operations carried out this summer, even though it wasn’t obliged to do so. The club is very confident in its ability to demonstrate that it will fully comply with Financial Fair Play rules for the fiscal year 2017-2018.

“Deputy CEO Jean-Claude Blanc met with UEFA experts including Andrea Traverso, responsible for Uefa Financial Fair Play, for more than three hours on 23 August at Paris St-Germain’s headquarters, where he demonstrated that the operations carried out with FC Barcelona and in progress at that time with AS Monaco followed the rules of Financial Fair Play for the financial year 2017-2018.

“On 31 August, the club’s general management again had exchanges with UEFA Financial Fair Play management to provide a more detailed account of how the transaction with AS Monaco would be integrated into the club’s accounts for this season, in terms of amortization and payroll, in compliance with French accounting standards.

“Furthermore, as for the summer of 2017, the club has already completed outgoing player transactions that helped improve club results by more than 104 million euros for the 2017/2018 season.

“The club also reminds, if necessary, that it has under contract many high valued players allowing the club to generate very significant capital gains in the next two transfer windows (January and June) of 2018.”