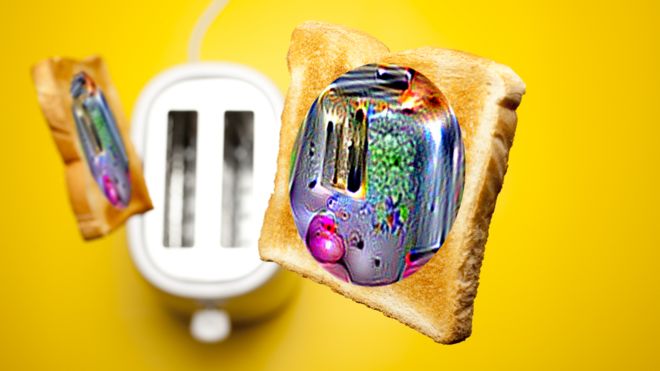 A team of Google researchers has created psychedelic stickers that can fool image recognition software into seeing objects that are not there.

Using a toaster as an example, the team produced colourful computer-generated patterns by sampling hundreds of photographs of the appliance.

When the patterns were put next to another item, such as a banana, many neural networks saw a toaster instead.

The team said the method could be used to “attack” image recognition systems.

“These adversarial patches can be printed, added to any scene, photographed, and presented to image classifiers,” the researchers said.

“Even when the patches are small, they cause the classifiers to ignore the other items in the scene and report a chosen target class.”

The researchers said their trick had worked because the computer-generated pattern was more “salient” to image recognition software than real objects.

Rather than changing the appearance of items to disguise them, the researchers found their toaster-inspired patterns “distracted” image recognition software.

“While images may contain several items, only one target label is considered true, and thus the network must learn to detect the most ‘salient’ item in the frame,” they wrote in their research paper.

The pattern consistently tricked image recognition software when it took up at least 10% of a scene.

By comparison, a photograph of a real toaster was much less likely to distract the software from another object in the scene, even at larger sizes.