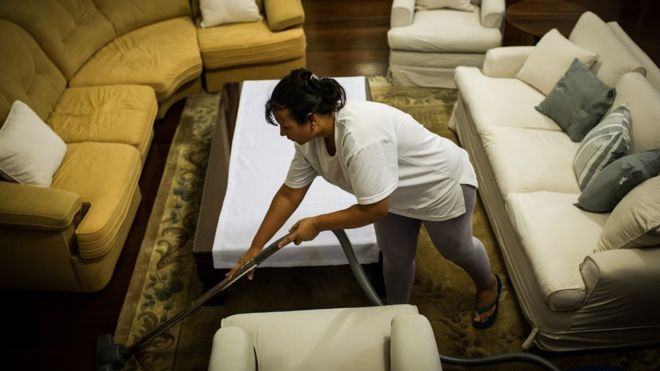 Sales of vacuum cleaners producing more noise and heat than suction are restricted under EU rules from today.

Vacuum cleaners using more than 900 watts and emitting more than 80 decibels will be banned when stocks run out.

They say some manufacturers deliberately increased the amount of electricity their appliances use because shoppers equate high-wattage with high performance.

“The lower power machines are perfectly adequate, and better for the planet”.

The EU’s own website says: “With more efficient vacuum cleaners, Europe as a whole can save up to 20 TWh of electricity per year by 2020.

“This is equivalent to the annual household electricity consumption of Belgium.

“It also means over 6 million tonnes of CO2 will not be emitted – about the annual emissions of eight medium-sized power plants.”

And the UK Climate Change Committee says that since 2008 electricity demand is down 17% (despite all our gadgets) and gas demand is 23% lower, thanks to tougher standards on energy efficiency in homes and appliances.

This, it says, has helped keep bills down.

But there’s a question over what happens to EU energy standards after Brexit.

“But we must retain the right to make and use sensible full-powered appliances in the UK. This shows why we must not agree to be bound by EU rules after Brexit.”

The EEB replied: “Without EU energy efficiency rules, the UK market risks getting flooded with inefficient and cheap imports from China which waste more energy and break easily due to lower standards.”

Efficiency standards are so effective at driving down bills and emissions that it’s believed they will be kept after Brexit.

But the government’s statement to BBC News on the issue was ambiguous.

A spokeswoman said: “Until we leave the EU, the UK government continues to implement European regulations.

“We support measures that will save households and businesses money on their energy bills.”

Vacuum cleaner entrepreneur Sir James Dyson has been in a court battle with the EU because he says the vacuum standards test doesn’t replicate real world conditions.

His spokesman told BBC News: “We agree with the principle of using standards to drive products that use less energy.

“But we think that technical innovation itself would be a better way of changing consumer behaviour.

“You can have a perfectly good vacuum cleaner running with lower energy.”

The latest Dyson model does qualify under the new EU rules.

Next week the government will be presented with a major report from energy economists making the case for a big boost to the economy through energy efficiency in homes.