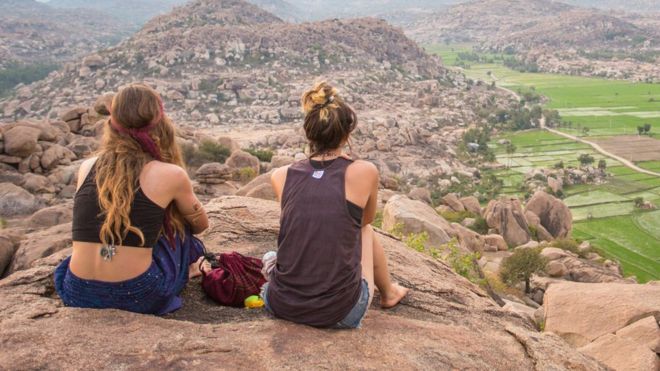 It is a stomach bug known to afflict some backpackers with bouts of uncomfortable diarrhoea.

Now scientists say they have discovered how the parasites that cause giardiasis – one of the world’s most common gastric diseases – make people ill.

This also allows bacteria already present in the body to join in and feed from the same nutrients, they said.

Some 500,000 cases of giardiasis are diagnosed each year, with people typically picking up the disease by drinking infected water or contaminated food.

Symptoms include severe diarrhoea, stomach pains, bloating, flatulence and fatigue and can last weeks or months without treatment.

Although it is found throughout the world, it is most prevalent in developing countries and is one of the most common gastric diseases caught by backpackers.

But although scientists have known of giardia’s existence for hundreds of years, until now it remained unclear how it makes people sick.

Researchers found the giardia parasite produces two types of protein that enable it to cut through layers of protective mucus in the gut – breaking the links that knit cells together – in order to easily access the nutrients within them.

One of the proteins does this by mimicking a group of human proteins called tenascins, which regulate cell adhesion and break apart when necessary, such as during wound healing.

But the giardia tenascins are used instead to upset the body’s balance by preventing healing of the junctions between cells that hold them together.

One of the study’s authors, Dr Kevin Tyler, from UEA’s Norwich medical school, said: “Because the giardia have broken down the cell barriers and made all these nutrients available, other, opportunistic bacteria can move in to take advantage of these ‘ready meals’ which can make giardiasis even more severe for some.”

Those suffering from giardiasis are usually able to recover from the illness with or without antibiotics.

However, about half of those who get the parasite experience no symptoms of the illness.

Dr Tyler said the difference in the severity of disease might be explained by the proportion of “good” and “bad” bacteria in the gut.

Those who become more ill may have a higher proportion of “bad bacteria” feeding off nutrients released by the giardia parasite, Dr Tyler said.

Dr Tyler told the BBC: “Some people have a gut that is predominantly full of quite good bacteria that doesn’t cause inflammation and illness and indeed may protect from it.

“What we think is that in people who have the bad bacteria, the pro-inflammatory bacteria, those start to use the nutrients that have been unleashed by the giardia.

“The giardia does the damage, allowing the nutrients to flow into the gut, and then if you have the wrong kind of bacteria you get this cycle of inflammation.”

This is why probiotic drinks and supplements – which populate the gut with good bacteria – are helpful in treating giardiasis, he said.

The study was published in the journal GigaScience.