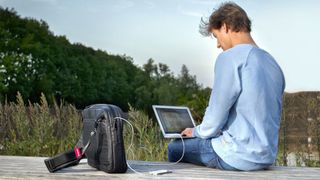 Thirteen inches. Arguably, it’s the perfect size for a laptop screen. Not too big nor too small, the best 13-inch laptop will sidestep the flimsiness and squint-inducing terror of a smaller notebook, absent the need to intimidate with a gargantuan form factor.

They’re not all Windows laptops either; Apple fans will rejoice at the fact that the MacBook Pro and MacBook Air continue to stun in 13-inch flavors. Whatever the case, you ought to find a notebook that – at the very least – incites interest. Whether it’s a 2-in-1 or a traditional clamshell you’re after, we’ve encapsulated the spice of life in our list of the very best 13-inch laptops.

But, whatever you do, be sure to read on to find our favorite 13-inch picks of the past few months in no particular order.

If it ain’t broke, make it handsome

Now graced with 7th-generation Intel Core i processors, Dell has struck (rose) gold with the XPS 13. The lush design, lengthy battery life and even the SD card slot are still intact, only now it’s souped up with improved internal specs and sleeker appearances reminiscent of the MacBook and HP Spectre lineups. What’s more, the full-size processor and 13.3-inch display are crammed into an 11-inch frame made possible by Dell’s own nearly bezel-less InfinityEdge display technology.

An affordable 2-in-1 laptop

Asus has added a new entry to its Zenbook lineup with the UX360, offering a lot of the same internals as its predecessor but with the flexibility of a 2-in-1 laptop. While the ability to bend over backwards may reduce the build quality somewhat, it offers new levels of functionality for computer users who want a laptop and tablet all in one. Thanks to an all-day battery, the Zenbook Flip UX360 really can go with you for everything you do. And, with a wide variety of internal customization, you can deck out the Zenbook Flip UX360 for your own specific needs, saving you money or boosting its performance.

The HP Spectre x360 is the one you introduce to your parents. It’s strikingly well-crafted, boasting a silvery design that makes it every bit as cutting-edge on the outside as it is within. Given the choice between a 7th-generation i5 or i7 Ultrabook-class processor and a 1080p or 4K screen, HP has gives plenty of room for customization. It’s not underpowered, nor does its battery life suffer from overcompensation. In fact, in our own movie test, the HP Spectre x360 lasted a whole 8 hours and 45 minutes. The only real catch is that, like a lot of its competitors, the Spectre x360 also lacks an SD card slot, opting instead for a pair of USB Type-C ports.

Great performance on the cheap

Though it’s failed to make a dent in the laptop space with much more than its Tab Pro S convertible, Samsung’s follow-up to the 2012 Series 9 notebook boasts not only capable specs, but a competitive price as well. Marketed as an Ultrabook, it’s certainly disheartening to know the battery life lasts only five hours, but given its sleek and sexy design, it almost doesn’t matter. What’s more, with the Samsung Notebook 9, you won’t have to deal with bloatware made infamous by many of the other Microsoft OEMs.

That’s not a typo you just read on the specs sheet – the Acer Aspire S 13 truly is a beast. Replete with a Skylake Core series processors shoved inside a tiny, 13.3-inch body, the Aspire S 13 can handle practically anything you throw at it productivity-wise. Unfortunately, the catch is that with all this power comes a distinct shortage on battery life. It may be an Ultrabook, but the Aspire S 13 only managed 3 hours and 12 minutes in our PCMark 8 battery test. Luckily, the Acer Aspire S 13 also comes with the benefit of USB 3.1, all but a boon in this awkward early age of USB-C.

Versatile with a generous helping of elegance

The Lenovo Yoga 910 is all about second chances. It throws away many of the signature design traits of the previous model, the Yoga 900, in favor of a more pristine outward appearance and a heavy duty Intel Core i7 processor as well as the option of a 4K display. Lenovo also managed to squeeze a larger, nearly 14-inch screen into the same 13-inch chassis of the Yoga 900 without compromise. Not to mention, even with the implementation of USB-C ports, the Lenovo Yoga 910 doesn’t completely neglect USB Type-A, dragging the precious connection standard of the past along with it.

The best battery life in a 13-inch laptop

In a market densely populated with slim-line laptops from a massive range of manufacturers, Apple’s MacBook Air fights on admirably – though it started showing its age on the outside a long time ago. It has Intel’s fifth-generation Core-series processors rather than the newest Skylake variants, but it’s still a capable machine; even more so since Apple made 8GB of RAM standard across the line. If you don’t like the look of its lowly 1,440 x 900 pixel-resolution display, there’s always the 12-inch MacBook – and new MacBook Air models are expected to launch this summer.

The smallest MacBook Pro is a force of nature

Though it may not have the 12-inch MacBook’s slick design, the 13-inch MacBook Pro with Retina features Apple’s Force Touch track pad that uses different levels of sensitivity instead of mechanical buttons to make clicks. Even without the fancy Touch Bar, the MacBook Pro exceeds expectations with two Thunderbolt 3 USB-C ports, quieter fans, louder speakers and even a battery life exceeding 7 hours in our anecdotal testing. Despite a controversial keyboard mechanism, the MacBook Pro is thinner, lighter and ready to travel.