North Korea agreed Tuesday to send a delegation to next month’s Winter Olympics, which are set to begin next month in Pyeongchang, South Korea. The rival nations’ talks are the first sign of a possible thaw in their relationship. 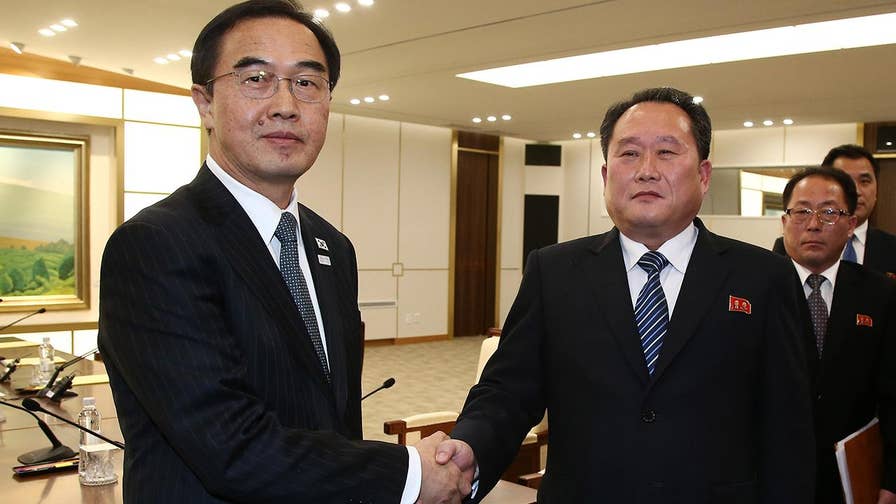 The talks were held for the first time since 2015 and Moon credited Trump for sparking them, according to Reuters.

“I think President Trump deserves big credit for bringing about the inter-Korean talks,” Moon said at a news conference. “It could be a resulting work of the U.S.-led sanctions and pressure.”

Trump has taken a hard line against Kim Jong Un’s belligerent regime, promising “fire and fury” in the face of North Korea’s continued testing of illicit ballistic missiles and nuclear weapons. The two leaders have openly talked about using nukes, with both Trump and Kim Jong Un claiming they have buttons on their desks to launch nuclear-tipped missiles.

The U.S. had expressed concerns that North Korea’s willingness to talk with Seoul could drive a wedge in their own relationship with South Korea, but Moon downplayed that notion saying the main goal was still a denuclearized peninsula.

“The denuclearization of the Korean peninsula the two Koreas agreed upon jointly [in the past] is our basic stance that will never be given up,” Moon said.

North Korea said it would still not discuss its nuclear weapons program with South Korea because its arsenal was only aimed at the U.S.

“North Korea’s weapons are only aimed at the United States, not our brethren, China or Russia,” said Ri Son Gwon, the head of North Korea’s five-member delegation at the talks with South Korea.

A hat tip from South Korea to Trump could signal another foreign policy win for the administration that started the year with a ton of momentum after defeating the Islamic State in Iraq and Syria.

The Trump administration authorized a more intensive air strategy, which left the so-called “caliphate” decimated. The terror group lost 98 percent of its territory it once held, U.S. military officials said in December.

U.S. officials said fewer than 1,000 ISIS fighters remain in Iraq and Syria, down from a peak of nearly 45,000 two years ago.