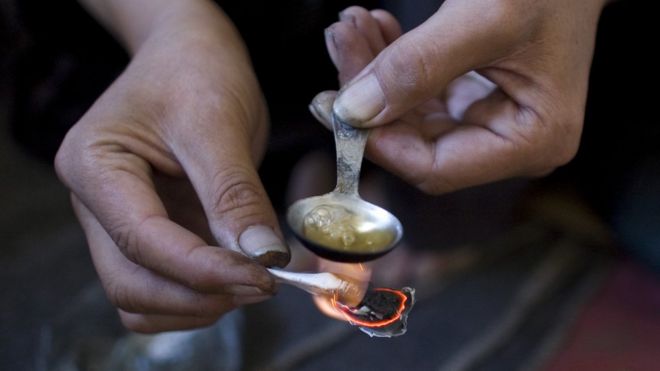 Turkey’s Interior Minister Suleyman Soylu has been criticised for saying police should break the legs of drug dealers who are seen outside schools.

He pledged to take the blame for it.

He was speaking at a public meeting on security, at a hall in the Turkish capital, Ankara.

He said the security forces’ seizure of 20 tonnes of heroin in 2017 had made it a record year for drug hauls.

“What we are doing to the PKK terrorists we must also do to drug dealers – no one can poison our future. What the security officer does is my responsibility.”

Mr Soylu’s comments came as a shock to many in Turkey. Social media buzzed with reactions.

Some people thanked him and praised him for what they perceived as bravery in the fight against drug-trafficking. However there was also some fierce criticism.

“A warrant for execution,” said the headline in a leftist paper, Evrensel. An MP from the opposition Republican People’s Party (CHP) has already filed a lawsuit against Mr Soylu for “incitement to commit a crime”.

A 2017 report by the EU’s European Monitoring Centre for Drugs and Drug Addiction says Turkey is a key transit country for gangs smuggling heroin to Europe from Afghanistan.

The report, citing figures for 2015, said methamphetamine was also a growing problem in Turkey, including ecstasy (MDMA) pills that came from the Netherlands and Belgium.

Drug-related offenders account for about 20% of the Turkish prison population, and their numbers are growing, the report said. Turkey hands down long jail terms for drug crimes.

Drug abuse rates in Turkey appear to be much lower than in more developed countries in Europe.

According to a government report, 1.5% of youths aged 15-16 have taken drugs at least once.

In recent years Turkish security forces have also destroyed marijuana plantations in some south-eastern areas where the Kurdish separatists have strong support.

Turkey has been fighting a Kurdish insurgency in its south-east for decades, and accuses the PKK of involvement in drug-trafficking.