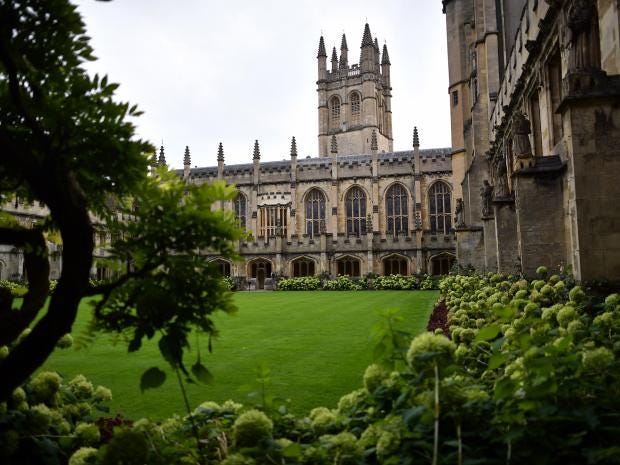 US universities make way for Oxford and Cambridge this year, amid reports of reduced funding.

British universities have taken the top two places in global league tables for the first time in 13 years, with Oxford Universitycrowned the best in the world.

Cambridge jumped from fourth to second place in the influential World University Rankings – the first time both institutions have held the top two positions.

Collated by Times Higher Education (THE), it is also the first time two European institutions have been placed in the top two spots.

The California Institute of Technology (Caltech), which was top between 2012 and 2016, is now joint third with Stanford University, which is also based in the Golden State.

THE said the margins were extremely tight at the top of the table, with all top ranked institutions excelling across 13 performance metrics.

But one of the reasons that the British universities triumphed was that they registered significant increases in their total institutional income – up 24 per cent and 11 per cent respectively.

The university’s vice chancellor, Professor Sir Leszek Borysiewicz, said it confirmed the institution was “among a small group of the most respected higher education institutions globally”.

He added: “We welcome the fact that UK institutions feature so highly in this year’s rankings, demonstrating their continued importance to the country and its economy.”

Caltech and Stanford, meanwhile, experienced significant falls in revenue this year – down 23 per cent and 24 per cent respectively.

The results will be welcomed by academics and industry leaders across the UK, some of whom have expressed fears over the negative impact Brexit might have on Britain’s highly regarded reputation for research.

But the researchers behind the tables nonetheless warned that the results underlined the risk leaving the European Union (EU) might pose to the UK’s global performance.

They also suggested that the full effects of Britain’s separation from the EU are yet to be felt.

There are already signs that UK universities are already starting to suffer from the Brexit vote, with the number of EU applicants applying for full-time undergraduate courses in the UK declining by five per cent since last year.

Phil Baty, editorial director for the THE Global Rankings, said: “The UK higher education system is facing intense political pressure, with questions over the value for money provided by £9,250 tuition fees in England, our continued attractiveness to international students, the flow of research funding and academic talent post-Brexit, and even levels of vice-chancellors’ pay.

“The data shows UK universities are consistently producing ground-breaking new research which is driving innovation, they are attracting international student and academic talent and are providing a world-class teaching environment. They are a huge national asset, and one that the country can ill afford to undermine at a time when its place in the global order is under intense scrutiny.”

The latest rankings also serve to highlight what is at stake if funding is not assured for British universities, he said.

“If we cannot agree a sustainable way to properly fund our universities, we fail to welcome global students, and if the research funding and academic talent that current comes to us from the European Union is cut off.

“But one thing this new data makes absolutely clear is that the UK has many of the very best universities in the world and it has one of the world’s strongest higher education systems.”

The findings also suggest a widening gulf between the UK’s super elite institutions and other universities.

Oxford, Cambridge and London universities have remained steady in the rankings. Imperial College London remained in eighth place, while University College London went down by one place to 16th. The London School of Economics (LSE) remained in 25th place.

However, several of the lower-ranked universities had fallen in the rankings.

The majority that lost places suffered falls in their reputations for teaching and research. Several Asian institutions had improved on these metrics.

Peking University, for example, is now on par with the University of Edinburgh. Both share joint 27th place with New York University.

But this year’s THE rankings follow the Teaching Excellence Framework (TEF) rankings, published by the Government for the first time this year as a way of measuring value for money in UK institutions.

Just under a third of the Russell Group institutions – considered the best in the country – scored gold after being judged across a wide criteria that included student experience, teaching quality and research.

The new framework produced a number of shock results. Warwick University was beaten by neighbouring Coventry, a former polytechnic, after it failed to score the top rating.

World-renowned London School of Economics expressed serious disappointment after scoring bronze, along with the universities of Liverpool and Southampton. Several institutions have since appealed against their ratings.