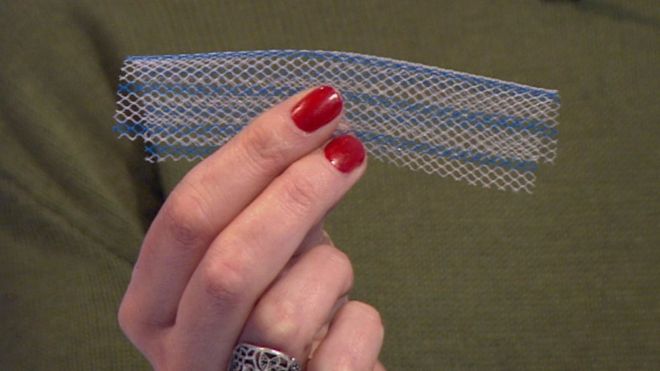 Women have long complained about the implants – which are used to hold up pelvic organs to treat incontinence and prolapse – causing agony by cutting into tissue.

Most of them suffer no ill effects, NHS England says.

It is not clear how many women have experienced mesh complications.

But more than 800 women are taking legal action against the NHS and mesh manufacturers.

Mesh treatment for prolapse has been a particular concern.

When a prolapse occurs, doctors sometimes insert a plastic mesh, made of polypropylene, into the wall of the vagina to act as scaffolding to support organs – such as the uterus, bowel and bladder – that have fallen out of place.

The National Institute for Health and Clinical Excellence recently said this surgery should effectively be banned.

Another smaller device made from the same material, called a tape, which is used to stem the flow of urine from a leaking bladder, has a much lower risk of complications, experts say.

The Department of Health have confirmed that their intention is for the mesh audit to take place, but have yet to release details.

The Royal College of Obstetricians and Gynaecologists (RCOG) advises women: “If you are considering a procedure using mesh, you should have a detailed discussion with an expert healthcare professional about the benefits and risks of the surgery for you. If you decide to go ahead with a procedure using mesh, the operation should only be performed by a specialist with expertise in this technique.”

A Scottish Government spokesperson said: “In Scotland we asked NHS Scotland health boards to suspend the use of mesh in 2014 due to clinical concerns. That suspension will remain in place until we are satisfied all necessary procedures