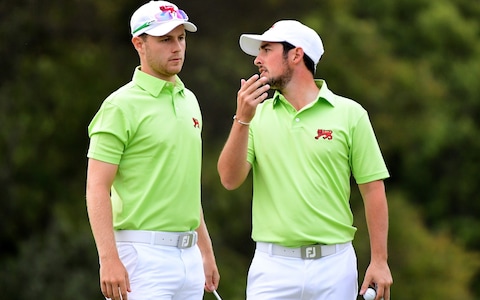 From his Playboy Mansion, Hugh Hefner had quite the view of the first day of the Walker Cup. Indeed, the old rogue might even have paused tending to his coterie when he heard the cheers emanating from the Los Angeles Country Club, where the 13thgreen is adjacent to the nonagenarian’s famous residence.

Before a rousing Great Britain and Ireland fightback, the United States were in the process of laying at least a few of their foursomes ghosts to rest and doing so in record fashion. In the 95-year history of this event there had never been an 8&7 win before. Until now.

As the Amateur champion and European Amateur champion respectively, Harry Ellis and Alfie Plant were expected to provide a stern test for Collin Morikawa and Norman Xiong. However the young Americans won the first five holes and did not look back, shaking hands on the 11th green.

It was a chilling start for Andy Ingram’s side and the startled expressions on the faces of the two Englishmen said it all. They had waited so long for this chance and then, before they really knew it, they were being forced to regroup.

No you do not, but Plant – who won low-amateur honours at the Open Championship in July – and Ellis had learned the hard way that Walker Cup is an imposing event. And, for all its beauty the LA Country Club is such an imposing venue.

It is rated as sixth most exclusive golf club in the world. As evidence, it apparently turned down Hefner when he attempted to join, presumably extending its strict “no movie star” policy to another area of the “entertainment industry”.

But the amateurs have been invited to play on fairways usually protected from the gaze of mere commoners, which has only added to their sense of occasion. As, naturally, did the appearance of President George W Bush.

This was not the usual case of a politician – retired or otherwise – showing up for the publicity shots. The “W” in the name of the 43rd President stands for “Walker”. His great grandfather George Herbert Walker happened to be president of the United States Golf Association in 1920 when he helped devise the Transatlantic contest.

The Bush family are rightly proud of the connection, with President George H Bush turning up at previous matches, and the presence  of “Dubya” threw yet more prestige on the most esteemed of amateur weeks.

“My great grandfather’s friend Davis gave the Davis Cup, so he decided to give the Walker Cup,” President George W Bush explained. ”It’s important for the traditions of the game that golf passes down the generations and so it does with my family. You know, it was a thrill to walk the holes with the US team and to have lunch with them. They are good upright citizens who are representing the greatest country on earth.”

The President is credited with providing the speech on Saturday night which motivated the US Ryder Cup team to launch their resurrection at Brookline in 1999 and, inevitably, this time he has again ramped up the Starred-and-Striped fervour for a US team desperate to avenge the record defeat at Royal Lytham two years ago.

“The President is the absolute role model; somebody who sacrifices eight years of his life, and even more, to work for the country and to do everything he can to make the lives of 200-something million people better,” Maverick McNealy, the world amateur No 2, said.

“He’s somebody that has represented his country to the fullest, and we get to do that in a much smaller way at the Walker Cup.It’s our job to win this week. We didn’t come here to lose. When we’re representing our country, we want our country on top; we want our flag being flown at the end of this competition.”

McNealy certainly seemed inspired as he and Doug Ghim accounted for the Welsh pairing of David Boote and Jack Davidson 5&4. However, by then Scotland’s Connor Syme and Ireland’s Paul McBride had struck for GB&I by beating Will Zalatoris and Doc Redman 3&2.

With another English pairing in Scott Gregory and Jack Singh Brar beating  Scottie Scheffler and Cameron Champ 3&2, GB&I courageously tied the match  at 2-2 and so stopped America from “winning” their first foursomes session  since 2009. “We needed that,” Syme said. “It felt special.”

Special is the word you often hear when players, young or old, talk about the Walker Cup. In the build-up, modern luminaries such as Dustin Johnson, Jordan Spieth, Justin Thomas, Justin Rose and Rory McIlroy all spoke with affection about their experiences in the biennial match.

“I played two years of amateur golf for that moment,” McIlroy recalled. “It was at ‘home’ for me at Royal County Down and even though we lost it was one of the most special occasions. It’s a week you have to enjoy, however you play. It’s the pinnacle of amateur golf.”

Plant and Ellis would have been advised to keep those words in mind.