Home
Internet
YouTube’s live streaming heads to iPhone and cuts out the lag, improves the chat 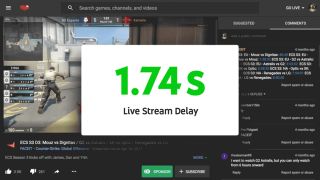 As live streaming competition continues to heat up, YouTube is adding new features that make broadcasting content not just easier, but faster.

Rolling out starting today, YouTube is adding a new ultra-low latency feature and more chat moderation tools to help out streamers while they’re on-air, according to the service’s official blog.

It’s also finally adding the ability to live stream straight from your iPhone and iPad screen, a feature that’s currently available to Android users and on YouTube Gaming.

During a stream, activating the ultra-low latency feature from the options menu can reduce delay between the broadcast and the viewer down to just a couple of seconds.

This makes it easier for the streamer to respond promptly to the audience’s comments, though the trade-off is a lower buffer barrier.

Should streamers not consider immediate viewer feedback a priority, they can use normal latency options as normal for a longer delayed, though less stutter-prone, experience.

Watch what they say

Streamers can also now quickly pause and review the chat feed mid-stream by holding the ALT/option key. From there, approving or rejecting a message can be accomplished in a single click.

This power can also be delegated to a moderator, should the streamer be too engrossed in a Dark Souls III boss fight to monitor comments.

Another new tool is the ability to opt-in to YouTube’s flagging system, which monitors and holds potentially inappropriate comments automatically until the streamer (or appointed moderator) approves, rejects or reports it.

This system works similar to how YouTube already auto-monitors comments on ‘regular’ videos, with live streamers also getting the ability to block certain keywords or phrases akin to the non-live portion of the service.

Finally, YouTube is adding the ability for streamers to share hidden user lists across comments and live chat, as well as the ability to more easily stream certain mobile games directly from YouTube’s main mobile app.

The latter feature is especially noteworthy, as it helps the Google-owned streaming service match up to the likes of Microsoft Mixer and Twitch, which are quickly beginning to claim mobile games as the next streaming frontier.